This week Facebook has started offering a new ad type called Instant Articles on iOS devices where publishers can have their articles load in the Facebook feed rather than taking you out of the app. An update allowing instant articles on Android will launch later this year. The articles that will load faster than organic feed posts from your friends. Instant articles can be identified by the lighting both in the top right corner. (as seen below) 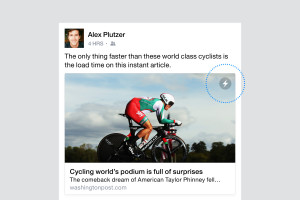 The whole idea is founded in the idea to keep you from leaving. The longer you keep swiping through your news feed the more money they make so they are filling all the holes that take you away. Facebook is boasting Instant Articles offer a fluid, interactive and immersive reading experience. Instead of having users wait for ads to open on another website Facebook pre-caches the content so it appears immediately when a user clicks it. Below are some examples Facebook gave of how some popular publishers are using it:

The same technology is being used for advertising as well. One of the examples being passed around is a Wendy’s ad where you peel back all the layers of one of their cheeseburgers. You scroll down through the ad seeing the ketchup, fixings, cheese and meat. Each section has a large image with a snippet of text down below. When you reach the end it lands on a page with the call to action saying “go taste the difference” and a way for you to find the closest Wendy’s. 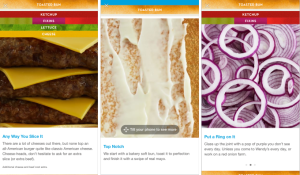